The result was a welcome one for Pilcher who has had a trouble plagued season after finishing an impressive fourth in his rookie season last year. After a tough time of late the Magnum Compliance Commodore ran well all weekend showing it’s true form in qualifying, being only slightly behind the front runners who were running fresh rubber compared with tyres three meetings old on the Pilcher car.

In the first race on Saturday afternoon the track was wet and in Pilcher’s words “I kept my nose clean and battled away in the rain,” keeping up a good steady pace to cross the line third at the flag, a result that later improved to second after post race investigations.

In the second race on Sunday morning Pilcher got a good start and slotted into fourth for most of the race before a safety car bunched the field up. With help from partner Kirsten calling the lights he had a “ripper restart” and went from fourth to first before the first corner. The Magnum Compliance Commodore held the lead for several laps before the tyres started to go away. “From then on I just sat back and set some good pace until the last corner where two cars went off in front of me,” said Pilcher after the race. “That gave me half an opportunity which I made the most of and I came home in second. A post race inquiry into my restart found that there had been no breach of the rules so the placing stood.”

The team knew that all that they had to do in the final race to gain a podium was finish, something Pilcher was aiming for after coming so close to the podium the previous weekend before the last race was cut short due to mechanical issues. Pilcher held fourth for most of the race before moving into third with the retirement of another car and brought the Magnum Compliance Commodore home in third place. “It was a struggle in this race due to the age of our tyres and brakes,” said Pilcher. “We lack the budget to be able to buy new ones so all we wanted to do was finish.”

After a torrid start to the season Pilcher summed it up perfectly on Sunday night. “I’m glad to finally get onto the podium and take home a round placing. Unfortunately we don’t have the biggest budget but we are doing what we can with what we have and still seem to be holding our own. Our team was a makeshift one this weekend with guys from all over town coming to help us for the weekend and they all did their jobs perfectly. Without the support of our sponsors VINZ, Magnum Compliance, Fuchs Lubricants, Protech Engines and Central Performance we just wouldn’t be able to do it.”

Pilcher now sits fifth in the championship despite missing the opening round at Taupo. With just two rounds to go the Pilcher Racing Team are going to try and make it to Manfeild in three weeks time for the penultimate round but it will depend on how much support can be found to make the trip. “It’s a tough ask to travel to the other island for five of the seven rounds but we are going to try our best,” says Pilcher. 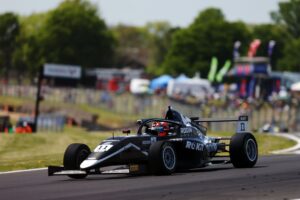